Virtualisation – what could it do for your business? 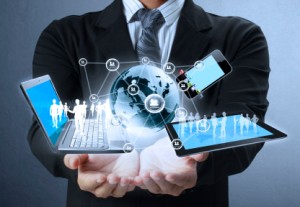 Virtualisation describes the process of abstracting a computer operating system and software from the hardware on which it is installed. Instead of installing software directly onto a machine, a hypervisor is first added, and a virtual instance of the server is created. The virtual machine then looks and acts exactly like a standard computer. This proven remote-service technology offers a number of benefits.

Doing more with less on servers

Traditional IT set-up suggests that certain applications need their own dedicated hardware to function properly – an email server, a database server, a file server etc. But typically each server may only use as little as 15% of its capacity.

By virtualising each server, many can be installed on the same physical hardware, maximising the use of available capacity and reducing capital investment in new servers. Other benefits include a reduction in energy consumption and costs, less system administration, and saving physical space that would otherwise be required to host each machine.

This kind of consolidation has been used by web hosts to provide virtual private servers to clients – a remote machine which can be used for development, web hosting, file storage or other capabilities, which will exceed their in-house IT provisions.

These same virtualisation techniques can also be applied to desktop PCs. However there is rarely any need to host multiple operating systems on a single PC in the traditional office environment; instead desktop virtualisation is most commonly used to provide hosted desktops.

Under a hosted desktop, a virtual machine is created on a Cloud server which looks and acts like a standard Windows PC. Users can then connect to this through either a standard web browser, or a lightweight dedicated app. All of their software and files are available, and their keyboard and mouse function in exactly the same way they would on their normal desktop computer.

The true value of virtualised desktop lies in remote accessibility and the obvious benefits in terms of flexible working provisions. Employees are no longer tied to their desks, instead they are able to connect to their virtual computer any place any time, so long as they have an active Internet connection. In the age of BYOD (Bring Your Own Device) this becomes even more valuable as employees can use their own laptops, tablets and even smartphones to work.

Virtual desktops create additional value for your business by reducing the amount of administration and maintenance they require. Deploying new PCs takes mere minutes, all pre-installed with the software your team needs, along with pre-configured access to corporate data stores. And as a subscription service, you only pay for the machines as they are ‘created’. Better yet, maintenance and update of the machines is included as part of the fee.

Virtualisation provides a useful tool for businesses to improve the ROI on their existing hardware, or to make a shift towards subscription computing and all the cost and flexibility benefits it brings.